Joseph 'Joey' Nuttall
The sporting life of Joseph Nuttall, ‘Champion Swimmer of the World’ was played out from 1881-1907 in the ‘new leisure world’ of the late-Victorian and Edwardian eras. During this period Nuttall established his reputation as the ‘Lightening Merman’ of Stalybridge firstly as an amateur swimmer from 1881-1888 and then as a professional from 1888-c1907. Nuttall claimed his first Amateur world title for the 500 yards championship in 1886 at the age of 17 and by 1901 he had established his fourteenth and last world title as a professional for the 200 yards. 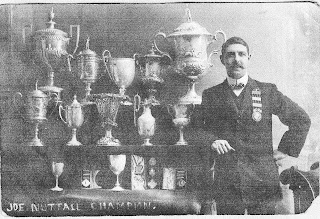 It was against a backdrop of great social and economic upheaval that ‘Joey’ Nuttall found a means of earning a living outside his family home in the Lancashire mill-town of Stalybridge. As industrial migrants, the Nuttall family had moved some six miles from Hulme, Manchester to Stalybridge in 1870. The ebb and flow of cotton operatives throughout the turbulent growth of Stalybridge were forced to live by the towns’ dictum that declared ‘Without Labour Nothing’. The provision of communal amenities for the benefit of the local populace is often viewed as a measure of a community’s social conscience. The opening of the publicly owned baths in 1870 signified not only the importance placed upon health and hygiene for the community but also its dependence upon ‘benefactors’ who on the one hand had caused the deprivations visited upon their workforce whilst, on the other hand offering opportunities for salvation in the form of institutionalised self-improvement.
The need for sound fiscal management of swimming baths had driven the sport into the hands of the new leisure entrepreneurs. Joey Nuttall benefited from the status of swimming in the 1880s and 1890s when he became the focal point for the split of the Professional Swimming Association (PSA) from the Amateur Swimming Association (ASA). Nuttall was seen by the new leisure elite as a participant who represented the worst excesses of the professionalization of swimming.
Amateur Champion, 1881-1888 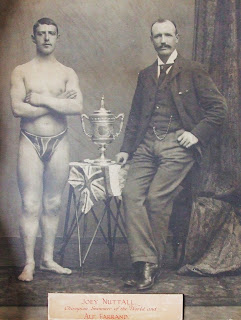 
Joey swam in his first professional race for the 1,000 yards Topping Challenge Cup at the age of 19, winning by 20 yards in a new world record time. This confirmed Nuttall’s dominance of ‘speed’ swimming at both the amateur and professional levels. The ASA had gifted the professional circuit their best swimmer and crowd-puller in their decision to ignore article 70 of their Association rules with Nuttall having ‘decided to shake off the thrall of amateurism, and make his plunge into the professional ranks’. The race had attracted so much interest that there was standing room only at the time of the race. There were a number of well-known ‘racing men’ in attendance and the betting was said to be brisk.
Nuttall proved to be a success from the outset of his professional career both with the swimming and gambling fraternities. The dominance of Nuttall’s performances and the ease with which he dispensed with the ‘cream of the professionals’ certainly encouraged a healthy interest in the world of professional swimming and in particular, the career of Joey Nuttall. By 1890 Nuttall’s dominance was such that despite large crowds at the PSA Championships at Lambeth Baths little interest was being shown in betting on the 1,000 yards challenge cup race. The event was one of the ‘chief races of the professional season’, however, the result was considered to be a foregone conclusion such was the dominance of Nuttall.

In 1894 Nuttall embarked upon a new phase in his swimming career by appearing in the aquatic entertainment show at the newly opened Blackpool Tower Aquatic and Variety Circus. This was a seasonal commitment from April until the end of August, appearing three times a day in the aquatic show. His exhibition of speed swimming was but one part of an extensive show performed by a whole host of professional swimmers earning a living by displaying ‘the art of natation’. Each season for the rest of the decade brought a cast of some of the most famous swimmers in Britain to the Tower Circus. 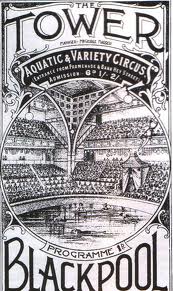 Joey Nuttall is a significant figure in the world of Victorian natation not only because of his dominance of ‘speed swimming’ from 1886-1901 but also because of the stance he took against a leisure elite who attempted to limit his earning potential as a swimmer. His ‘sporting life’ exemplifies the veracity of the late-Victorian puritanical mind-set towards the professionalization of sport and the pursuit of respectable forms of recreation.
The ‘ownership’ of competitive swimming was essentially dominated regionally by local swimming clubs who saw the imposition of draconian codes of conduct by those in governance as a means of restricting their income. The conundrum faced by talented working-class swimmers was not so much how to earn a living as a swimmer but rather, how to supplement a ‘respectable’ living with the pecuniary rewards associated with success on the swimming gala circuit. The value of a trophy and the payment of legitimate travelling expenses appear to have been clouded by the sports inextricable links with gambling and the new phenomenon of the leisure entrepreneur.
Joey was not only a real champion of natation but an iconic figure to the inhabitants of Stalybridge in that he espoused the benefits of a work ethic that had provided him with a means of self-improvement, self-reliance and made him a productive member of Victorian and Edwardian society.

Posted by Keith Myerscough at 05:37